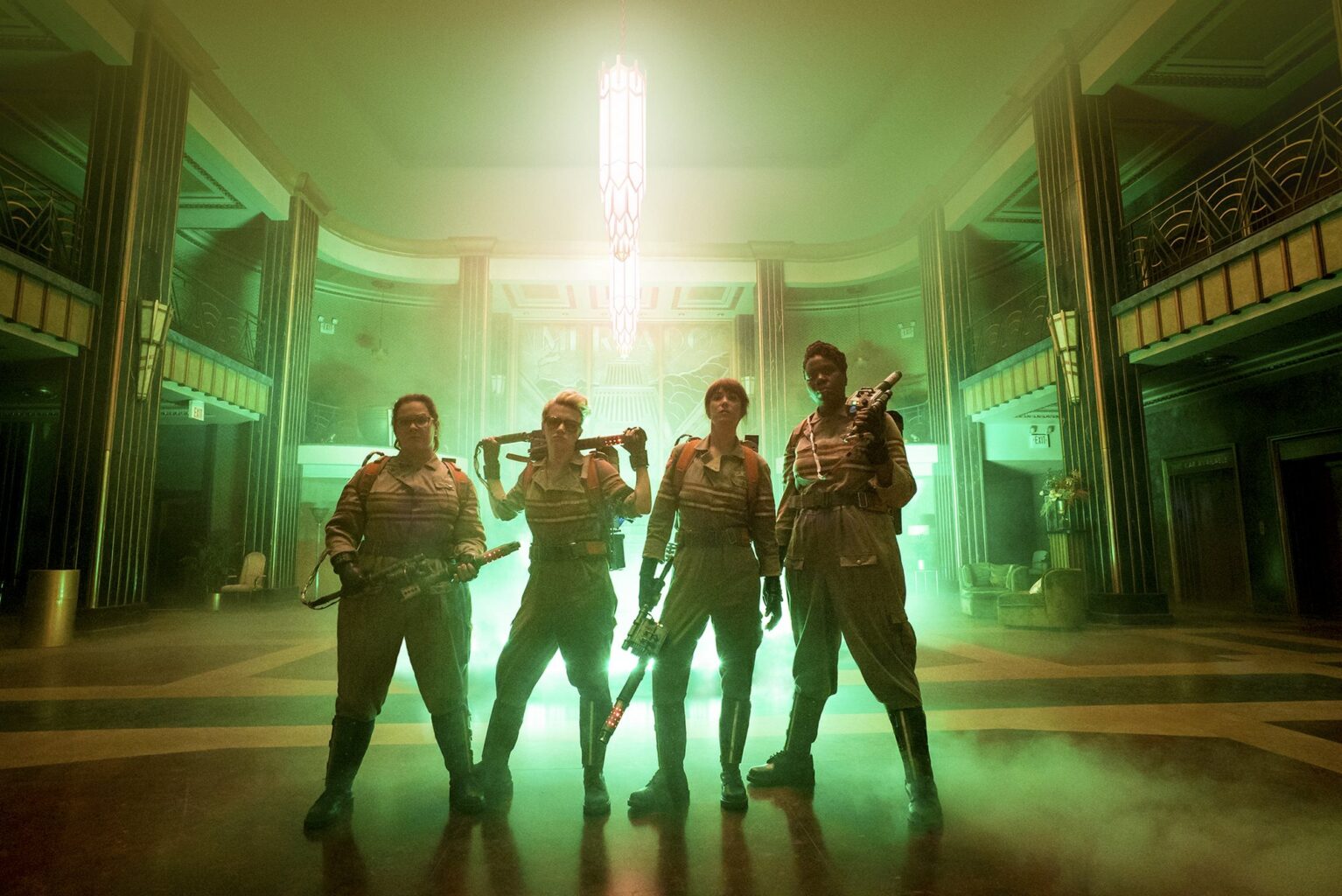 The new film began with director Paul Feig, who, as the creator of “Freaks and Geeks” and the director of Bridesmaids, The Heat, and Spy, has built an impressive comedy resume of some of recent years’ most successful, groundbreaking, and memorable comedies. Given the opportunity to reboot the franchise, it was Feig who saw a way to bring one of his personal comedy influences into the 21st century. “I was an enormous fan when Ghostbusters first came out,” he says. “I saw it the opening weekend in the theater and had honestly never seen a comedy do what that movie did to that audience. People, including myself, just lost our minds, not only because it was funny. It was the funniest people – we all loved Bill Murray, Dan Aykroyd, Harold Ramis, and Ernie Hudson, so seeing them together – this supergroup of funny guys – made it even better. But the thing that put it over the top was the context of an enormous world of fighting ghosts with technology… that’s the greatest idea in the world. It’s one of these things that make you say, ‘I wish I had thought of that idea.'”

Naturally, the idea for another Ghostbusters – as a sequel – was one that had been explored for quite a while. “I’ve always wanted to do another sequel,” says Ivan Reitman, who directed and produced the first two iconic films in the franchise, and now produces the new film with Amy Pascal. “It’s one of those movies that you should revisit and I was really hoping that I could do it. But unless we all agreed on something, it wasn’t going to get done. Getting four people – especially these four people – to agree was kind of impossible. And then, unfortunately, we lost Harold.”

With the passing of Harold Ramis in 2014, the studio and Reitman began to look for a new comedic talent to take the helm of a future film. That’s when Feig entered the picture. “I knew they’d been trying to put together a sequel for a long time,” says Feig. “I started wracking my brain. Funny people fighting the paranormal is still the greatest idea ever, and it felt like there was still so much to explore outside the worlds of the first two films. I thought, ‘How would I do it?’ Well, I’d make it with the four funniest women I know. That excites me, because it makes it something new.”

When it came to casting the role of Erin, Feig says McCarthy was already on board, which led to what seems like a first go-to candidate in her Bridesmaids co-star. “Kristen’s name just kept coming up,” Feig says, “but I didn’t even know if she’d want to do it, because she’s been showing what a great actress she is in so many dramas lately. Then, out of the blue, my wife was talking to Kristen and she said, ‘Oh, I know Paul’s doing Ghostbusters, and if he’d ever want me to do any little part in it, I’d love to.’ That was music to my ears, because Kristen would be so good in this role. She’s really one of the funniest people in the world – she makes me laugh and always has.”

But one other reason why these four actresses were right for the roles was that beyond their individual talents, Feig knew they would blend well as a team, creating a whole that was even stronger than its individual components. “That’s why it was important to me to cast actors who were friends in real life, because when you do that, you get a level of camaraderie, realness, and warmth between them that you don’t sometimes get when you put actors together who don’t know each other,” Feig continues. “It’s always been important to me – it’s one of the reasons why I think Bridesmaids worked so well. Kristen and Melissa were Groundlings together, did Bridesmaids and ‘Saturday Night Live’ together. Kate and Leslie are on ‘Saturday Night Live’ right now. All four of them have worked together in various projects, and they all have a very different sense of humor that complements each other: Kristen is just so good at that contained, neurotic comedy that she keeps very fun; Kate is such a physical comedian, but has this inner oddness, providing the movie with a weirdo energy; Leslie is just an explosion that comes onto the set; and Melissa is the leader of the pack. You’re really getting four very distinct characters, four very distinct personalities, whom also happen to be able to kick a lot of ghost ass.”

“Erin grew up believing in ghosts – she actually saw a ghost when she was a child, and no one believed her except Abby. That really scarred her.” Kristen continues, “She wanted to live a life where she wasn’t the weird one, so she left the paranormal world behind and went into academia, becoming a professor at Columbia University. Of course, she finds Abby again and meets Holtzmann and Patty. As it turns out, they’re these four misfits that find each other. I love that kind of story.”

Like McCarthy, Wiig relished the chance to do stunts for the film. “It was unlike anything I’ve ever done before. We couldn’t wait to get into the stunt rehearsals.”

Wiig was similarly thrilled by the chemistry between the four Ghostbusters. “It’s always a great experience when you can find that right project to work with your friends and people that you love,” she says. “I’ve known Melissa for many, many years – we knew each other for almost 10 years before ‘Bridesmaids.’ She’s just really, really fun to work with and we laugh all the time, so it was so nice to be together again. Leslie makes me laugh so hard with everything she does – every time Leslie said something, I would just lose it. It’s a very funny character, but I don’t even have words for what she does with every line – she’s so specific and it comes directly from her. And Kate – Kate’s the best. I find her so interesting. She’s so fearless – she takes chances every scene. She does the unexpected, and it’s always funny. I love watching her.”

Feig’s reputation for directing sharp comedies starring the greatest female comedians working today – in genres usually dominated by male actors – has made him one of the outstanding directorial voices in film comedy. However, for Feig and his actors, it’s all about bringing the comedy and making a motion picture that will entertain as many people as possible.

“Paul makes me laugh so much,” says Wiig of Feig, who also directed her in the Oscar®-nominated film, Bridesmaids, which Wiig co-wrote with Annie Mumolo. “We have a very similar sense of humor in what makes us crack up. Once we start we can’t stop.”